Fox Den is a small publisher of print and e-books, concentrating on History and SF&F.

We are currently full-up with projects and are not accepting submissions.

No Turning Back by Donald S. Lowry (reprint)

This first volume of a purely chronological account of the last year of The Civil War was originally published in 1991, and has been out of print for over a decade. Fox Den is bringing it (and the other three volumes) back into print in ebook and hardcopy formats. 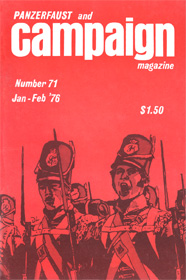 In January-February 1976, the magazine had its first name change, to Panzerfaust and Campaign, the start of a transition that would finish in 1977. The feature article was a travelogue encompassing Origins I and several wargame companies.